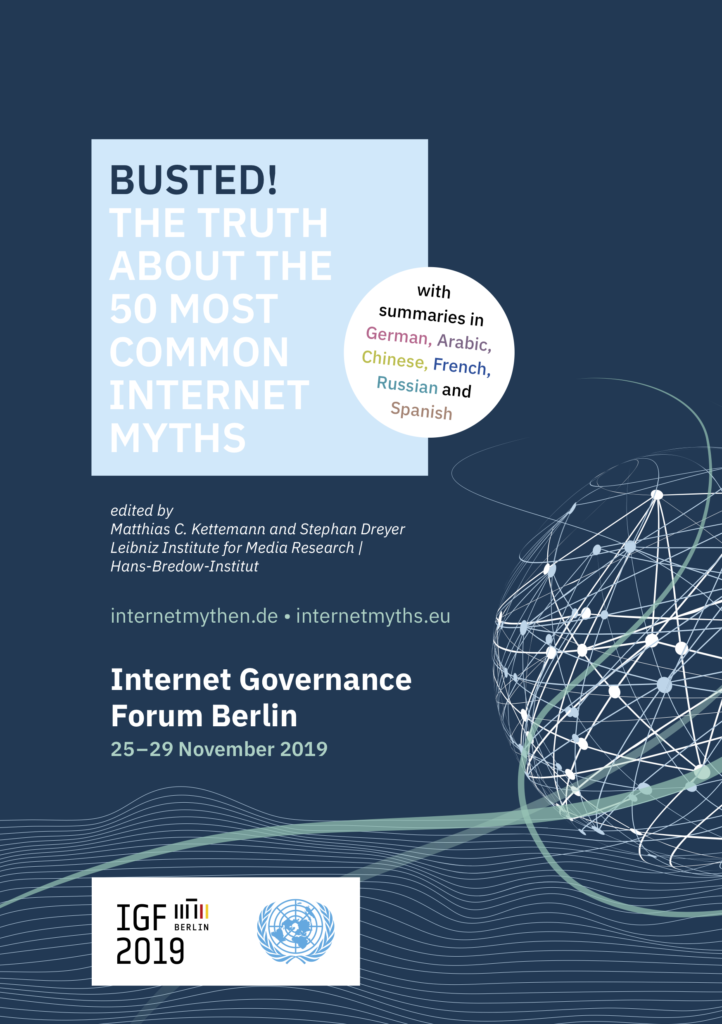 Myth: The Internet is a ‘network of networks’. It connects heterogeneous elements, not just technically, but also socially and economically. The ‘network of networks’ idea has influenced peer-to-peer networking, ideals of scientific and democratic values, and Internet Governance. Basically, it promises universal connectivity and interoperability.

Busted: Yet the Internet we have is not an internetwork of heterogeneous networks, as counterintuitive as it might seem. Network protocols are infrastructure, and infrastructure is boring, bureaucratic and usually taken for granted. Yet developers and administrators of network protocols know about the social and relational character of digital infrastructure, and what is at stake politically in the design of network protocols. In a 2006 interview, computer scientist David Reed made some 1980s political choices of protocol developers transparent: “In fact, the idea of pursuing a thing called ‘the Internet’ (an ur-network-of-networks) was a political choice – that universal interoperability was achievable and desirable. It’s parallel to ‘One Europe’ or ‘World Government’, though not the same. The engineers involved were not ignorant of the potential implications at the political level of that choice” (Reed in Gillespie 2006, 452). Reed’s argument is somewhat typical for the values that influenced the design of Internet protocols and its end-to-end architecture. It is also missing one important historical point.

‘Universal interoperability’ depends on standardisation, and network protocols form the de facto standards of digital mediation. TCP/IP, the Transmission Control Program and Internet Protocol has been imposed as a standard by the US Department of Defense on January 1, 1983. US universities followed that directive and gladly adopted TCP/IP. What did that transition within the ARPANET achieve? Computer scientist John Day argues that within that infrastructural shift the internetworking layer actually got lost. Picture Day’s central argument not in all its subtlety, but in its consequences when he asks “How in the heck do you loose a layer?” (Day 2011). He stresses that the split of TCP and IP “contributed to being an Internet in name only” (Day 2013, 22). Open Systems Interconnection (OSI) and other internetworking approaches took into account that interconnected networks could be based on completely different technologies and addressing schemes. But the Internet Protocol created only one address space for all connected networks; and today’s Domain Name System has been built along that path dependency. You can still hook up any other network with obscure protocols to the Internet as long as it uses the ruling IP addressing system. The 1990s slogan “IP on everything” did not create an ur-network-of-networks. It rather reinforced the loss of what would have been an internetworking layer in a scientifically sound and technically interoperable network architecture (Day 2008). Currently, we need to live with that flaw. The Internet is not doing the heterogeneous networking of heterogeneity that so many people still expect it to do: “OSI had an Internet Architecture and the Internet has a Network Architecture” (Day 2012, 15; cf. Russell 2014).

Truth: Ever since the internetworking layer got lost in 1983, the Internet’s architecture depends on a homogeneous system of naming and addressing. The domain name system DNS does exactly that, creating one seamless space for IP addresses that needs to be centrally administered, even if domain registration procedures are decentralised. The current Internet does not interconnect completely heterogeneous networks, but remains just one single network on the level of naming and addressing. So when will we have a real internetwork?

This is a slightly modified version of a text which is appearing in Busted! The Truth About the 50 Most Common Internet Myths, edited by Matthias C. Kettemann and Stephan Dreyer, Hamburg: Leibniz Institute for Media Research | Hans-Bredow-Institut, 2019. The book is going to be launched at the Internet Governance Forum in Berlin.

John Day, How in the Heck Do You Lose a Layer!? (Future Network Architectures Workshop University of Kaiserslautern, 2012). https://www.researchgate.net/publication/261458332_How_in_the_Heck_do_you_lose_a_layer.